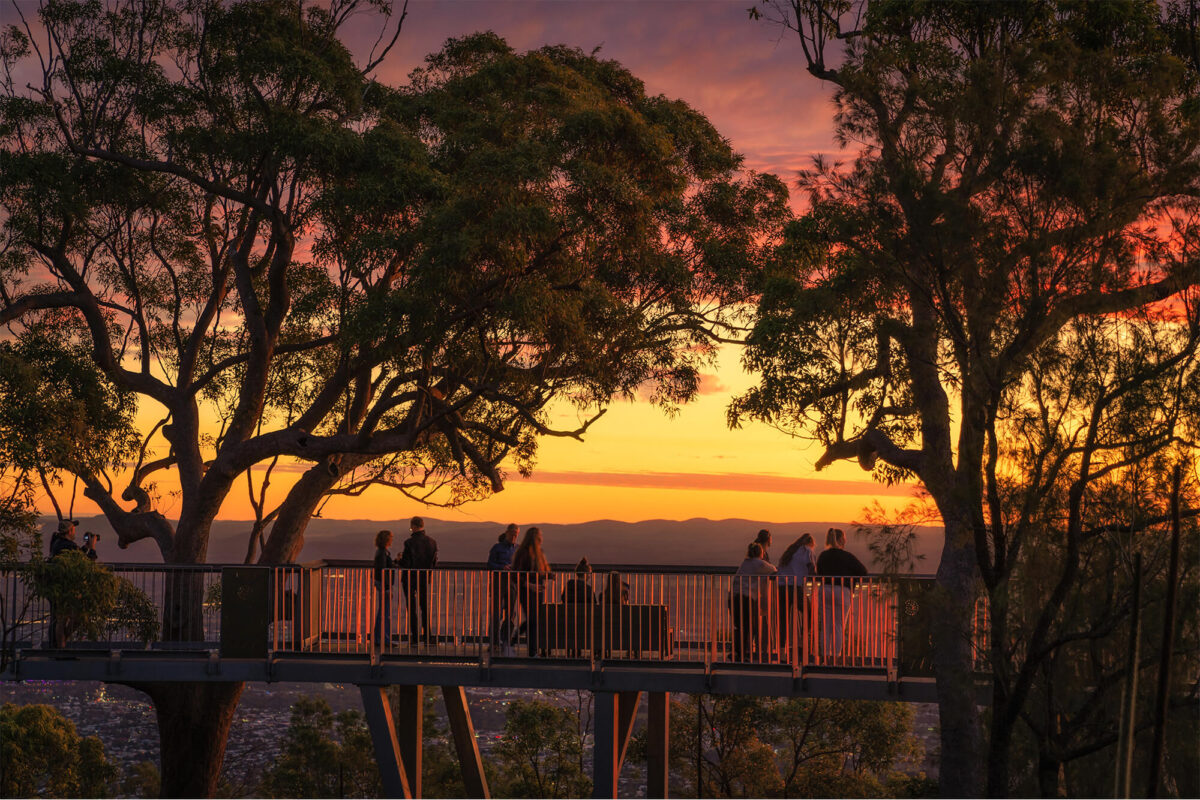 Mount Archer National Park protects bushland remnants in the Berserker Ranges, a scenic backdrop to Rockhampton. At 604m above sea level, Mount Archer is the highest peak and provides spectacular views of the city and the surrounding ranges. The park covers 4250ha of open forest and woodland communities dominated by eucalypts, with a large pocket of dry rainforest in the deeply incised Moores Creek valley. The dry rainforest communities are areas of high conservation value and include several plant species with restricted distributions.

Looking after the park

Mount Archer is part of the Darumbal tribe Raki-warra clan’s traditional country and every hill and creek is of special significance to them. They hunted wildlife and gathered vegetation such as kangaroo grass seeds and cycad fruit to prepare and eat.

The Archer brothers explored the Fitzroy area in 1853 and named the Berserker Range and Mount Sleipner. Mount Archer was later named in their honour.

In the nineteenth century, gold was mined on a small scale in the Berserker Range. The current national park was set aside as a water reserve in 1898, and two years later grazing leases were issued. The area was then declared a timber reserve in 1940 and mainly ironbark, white mahogany and lemon-scented gum were harvested.

The last grazing lease expired in 1974 and the timber reserve was revoked in 1985. The Queensland Parks and Wildlife Service then started to manage Mount Archer and it was gazetted as an environmental park in 1987, then as a national park in 1994.

Take the opportunity to explore Mount Archer’s variety of vegetation types on the Zamia Walk. Most of Mount Archer is adapted to the seasonally dry conditions and supports fire-tolerant open eucalypt forest. However, different vegetation grows in areas protected from fire, such as the dry vine forest growing on the steep rocky slopes and the rainforest sheltering in the moist creek terrace and lower slopes.

At the summit, the track enters a windswept yellow stringybark forest with a ground layer of grasstrees and cycads. Soon, lemon-scented gums, pink bloodwoods and forest she-oaks feature.

Further down, the steep track passes through open ironbark forest and then rainforest where ferns and cabbage-tree palms line a gully joining Moores Creek.

The rainforest, with spreading figs and motley-barked scrub ironwoods, has an open understorey dotted with ferns and seedlings.

On the edge of the rainforest, about 5 km from the end of the Zamia Walk, the track passes through a small patch of dense vine forest with Burdekin plum, tuckeroo and python trees, and twisting woody vines.

If you look carefully in the open forest, you might see ground-dwelling reptiles like skinks, blue-tongue lizards and yellow-faced whip snakes.

Keep watch for feeding parties of sittellas, lorikeets and honeyeaters as they fly through the canopy. Powerful owls and glossy black-cockatoos can also be seen in Mount Archer’s forests. Listen for continuous clicking sounds as glossy black-cockatoos break forest she-oak tree cones to feed on the seeds inside.

You can hear rufous shrike-thrush, white-browed scrubwrens and Australian brush-turkeys in the rainforest. This patch of forest produces enough fruit to seasonally sustain a population of brown cuckoo-doves, wompoo fruit-doves and topknot pigeons.

At night, brushtail possums scurry about and flying foxes feed on flowering eucalypts and paperbarks. The forest floor comes alive with the sound of northern brown bandicoots and small native rodents, called melomys, shuffling through the leaves as they search for a meal.

Trout gudgeons (small native fish) live in small ponds, avoiding freshwater crayfish from below and kingfishers from above. Wait quietly to see unadorned rock-wallabies come to drink from the creek in the early morning and late afternoon.